By Diane Bobis< in Winnetka Living

In 1924, Swiss immigrants Walter and Lina Bratschi moved their family from Chicago to Winnetka and built a home on Cherry Street. Fifteen years later, from that same home, they built a business that would go on to serve their community for eight decades – and counting.

Walter Bratschi was 50 years old when he earned his master plumbing certification and started his own plumbing company out of 688 Cherry. As the business grew, he rented out (and eventually bought) the space of the old Brady-Happ blacksmith shop at 801 Oak Street. With no telephones in the shop, wife Lina ran back and forth from home with urgent messages from customers. And daughter Norma, who took a bookkeeping class at New Trier High School, became Bratschi Plumbing’s first bookkeeper. She likely never calculated her future granddaughter, Carrie Hoza, would be dispatching calls out of that very same shop in 2017.

“My work inspirations are my family members that have worked for this company since its beginning, including my father Phil Hoza and Uncles Al and Jeff Hoza,” says Carrie. “The ability to start a company and maintain it for 80 years, plus all the knowledge possessed regarding the plumbing and infrastructure of the village, impresses me on a regular basis.” A veteran of the United States Army who served a tour of duty in Iraq, Carrie completed an apprenticeship program and received her plumbing license in 2014, officially making her a 4th generation plumber in the Bratschi-Hoza family.

“Being the fourth generation, I aspire to continue operating a successful business and being the best business person and community member I can be,” reflects Carrie, who is currently finishing up her role as Veterans Advisory Board Chair for U.S. Senator Mark Kirk. She also serves on the Board of Trustees at Kenilworth Union Church, and is an active member of local VFW Post 4831 and community service organization The Winnetka Club – all while answering the calls of local customers with burst pipes, broken water heaters, or maybe even a frog in their toilet. (Carrie was happy to remove him and find him a friendlier home by the Kenilworth Ditch.)

“I enjoy helping people out when they are in need, and I actually like physically working with the tools,” she says.

“Every service call is different; it’s like solving a new puzzle every day.” The licensed journeyman plumber expresses she is extremely lucky to work with very talented and loyal employees she has known for most her life, and also with family members who truly all get along.

“We not only work in Winnetka and nearby communities, but also live here and have raised our families here,” Carrie says. “We strive to be the best version of ourselves daily and take great pride in where we come from, and where we are headed as a company. We cherish our customers, our employees and our history.”

Bratschi Plumbing Co. celebrates its 80th anniversary this month. The Bratschi-Hoza family was recently recognized with the 2017 Winnetka Historical Society Heritage Award, an honor presented to families who have made contributions to enrich the quality of Winnetka village life. 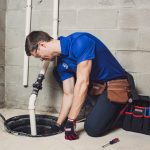 How to Know When to Replace Your Sump PumpPlumbing